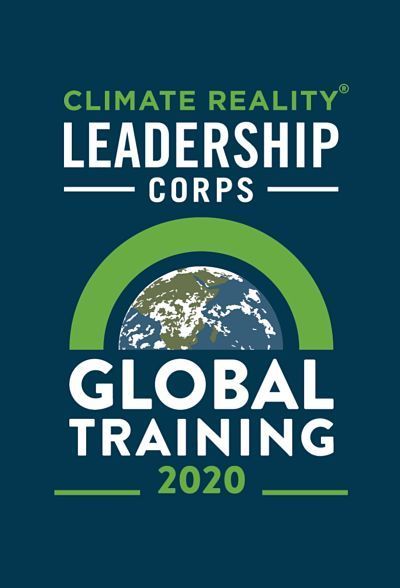 Next, there is offer you the letter of “Overview”, which The Climate Reality Project, sends previous to begin the formation “Global Training LeaderShip Corps”:

To catalyse a global solution to the climate crisis by making urgent action a necessity across every level of society.

MILLIONS ARE CALLING FOR CLIMATE ACTION. WE’RE TURNING UP THE VOLUME

At The Climate Reality Project, we believe that everyday people can change the world.

With the climate crisis devastating the Earth right before our eyes and scientists warning of just 10 years to avert catastrophe, the need to leave fossil fuels behind has never been clearer. And yet, even with millions calling for action and a just transition to clean, renewable energy, too few of our leaders are listening.

We’re here to change that.

Founded and chaired by former Vice President Al Gore, we’re building a critical mass of climate activists to sound the alarm on climate and drive a just transition to clean energy worldwide.

We believe real change comes from the ground up. That’s why we train and empower people of all ages and walks of life to make a difference in the future of our planet, sharing the truth of the crisis, mobilizing communities for action, and pulling on the levers of power.

At the heart of this effort is the Climate Reality Leadership Corps, a global network of over 21,000 powerful activists personally trained by Vice President Gore. Working through over 140 chapters across the US and branches in 10 key countries and regions, Climate Reality Leaders are trans­forming how the world sees climate, bringing practical solutions to every sector, and creating overwhelming demand for action.

This year, in the wake of the COVID-19 crisis, we have moved our training to a virtual setting, allowing us to continue this crucial work even in a time when we can’t be physically together.

With this community of change-makers and over 1 million digital activists alongside us, we’re creating a new consensus on climate action and bringing the world together to make our leaders act in 2020. It only happens when people stand up and take the planet’s future into their own hands. People just like you.

Goal 1: Build a critical mass of public support for change.

Over 21,000 Climate Reality Leader activists reach beyond traditional green groups to raise awareness of the climate crisis and how we solve it with young people, frontline communities, parents, professionals and more, building a diverse and powerful movement for action.

More than 140 chapters connect Climate Reality Leaders and local activists in working together to fight fossil fuels and bring practical clean energy solutions to their communities.

Community leaders train as Climate Speakers and serve as trusted messengers on climate to their colleagues, constituents, neighbours, and more.

Activists build pressure on local county governments to support the Paris Agreement with practical climate solutions in their community.

Activists work with Ohio River communities to raise awareness of the climate and health threats of fracking and petrochemical industries and build support for alternative ways forward for the region.

Branches in 10 key countries and regions partner with businesses, grassroots organizations, and local governments. Together, branch activists and partners mobilize broad support for practical climate solutions in their communities and strengthening national commitments to climate action through the Paris Agreement.

Inside the program of activities that we must go completing like “climatic leaders” in the frame of formation of the project The Climate Reality Project, there is the writing and presentation of a history that personnel and particularly it has impressed us along our life. From a meteorological important event (sticker slag, rain in the shape of hail, overflowing of the river bed of a river, period of drought, etc.) to problems of health derived straight from the climatic imbalance, since it can be COVID19, appearance of allergic pictures, an environmental contamination that it can affect to a chronic illness or punctual events, as dissuading to go in for sport in the exterior.

So that, next, NaturClimb sums up like nurseryman and engineer of Mounts, an event that the latter years has continuing in the south of France. The death of healthy copies of white oak, in the state of adult’s development to mature, that is to say, when the tree feels in the plenitude of its life.

THE EXPANSION OF THE MEDITERRANEAN VEGETABLE SPECIES TO MORE CONTINENTAL AREAS

Although I am a Forestry engineer, at present I develop my professional activity as tree climber or arborist, between the south of France and the south of Spain, although, about 80 % of my invoicing is in France.

The nature is full of bioindicators, that is to say, across the flora and fauna that inhabits an ecosystem, we can foresee not only the minimal and maximum temperatures, but the future evolution of these.

The nature is a competition and cooperation simultaneously, so that, every space is occupied in different moments by different domineering species and / or codomineering, that are happening in the time, adapting itself to the climatological changes that they were affecting, between others, to the water regime and to the soil where they live.

Namely the species that occupy an ecosystem, define the temperatures status to us, being able to know all the thermal changes; the regime of precipitations and the stored groundwater and the type of soil, not because this one is going to change geologically in a fleeting way (in our time scale), but because every species prefers a type of soil.

The coastal band of the south of France, at a height of Marseille, is dominated by Pinus halepensis and by Pinus pinea (stone pine), depending principally on the type of soil, and in many places, the holm oak (Quercus ilex) appears like species dominated under its arboreal canopy. The successions of domination of the vegetable species, inside the natural cycles, it is governed by the forest wildfires; it is for it, that we find species more pirophyte (adapted to the dynamics of wildfires) than others.

The same way as we are moving away from the coast, the meteorological conditions not only stop being less humid and drier, but it changes the regime of temperatures and of precipitations, so that there are located forests in which, the domineering species is the white oak (Quercus pubescens), much more demanding in water and sensitive to high temperatures.

In one of the places that I inhabit (Saignon, 84400) in the south of France, the white oak (Quercus pubescens) that is in stands forest like domineering species in a development phase between adult and mature (specimens with more than 100 years, but less than 250 years), without apparent causes, many specimens show the physiological state of stress and consequence of this one, a decay, in some irreversible cases, and that it finishes with the slow death of the magnificent trees. After discussing with local aged countrymen, undoubtedly, it is crossed by a drought period, with much less cold and short winters, and more warm and long summers.

Notice other one important, it is the increase in the daily thermal change, especially in the transitional periods from the winter until the summer and vice versa, that is to say, in spring where the night minimal temperatures, they are still low and the day maxims begin to increase quickly, and in autumn, where the day maxims are very high and the night minims begin to diminish with regard to the summer ones and the first frosts appear just before dawn.

At the same time, it is possible to appreciate in the dominated arboreal canopy, a relative near to the white oak, of much more Mediterranean character, and who has already arranged to meet earlier, the holm oak (Quercus ilex), who is making use of this climatological imbalance, at the moment, to settle in the latent state in the shade of the oak. There are areas where it is possible to find in an isolated way, some arboreal pine like Pinus halepensis and trees of the genre Cedrus spp., more adapted to the fires and of course waiting also for its opportunity opposite to the fire.

An important remark to be done, is that there are no more long-lived trees because, as I have spoken with naturalists, it is thought that this region was repopulated initially with acorns that were carrying the birds (raven, crow, etc. genre Corvus spp.) from other colder regions.

As historical fact in the place that is quoted, it is interesting to notice, that only does thousand five hundred years, was the alder (Alnus glutinosa) the domineering species of these forests, and it does approximately ten thousand years, the hazelnut tree (Corylus avellano). Both species need conditions with major water regime and support maximum temperatures lower than the current ones. Curiously, if it is possible to find some copy of hazel (Corylus avellano), but not of alder (Alnus glutinosa). Of course, could be for the size of each one, the hazelnut tree has the size of a shrub and occupies shady areas in relatively deep and rich soils, can live in the shade of the oak.

This site uses Akismet to reduce spam. Learn how your comment data is processed.