Being adapted to the natural cycle of the caterpillar procesionaria (Thaumetopoea pityocampa), NaturClimb realizes the pest control in every period. An ecological and respectful intervention with the environment, without making use of the application of pesticides or chemicals, stays away of all kinds of fumigations.

The procesionaria, that we usually find it in the pines, hence it is named the procesionaria of the pine or caterpillar of the pine, it is a species of lepidopterous, and also it can nest in cedars and firs. In certain areas in France, it is attacking seriously to the cedars, therefore it demonstrates its adaptation high capacity invading to other conifers.

The life cycle of the procesionaria of the pine develops generally on a finished year. This cycle changes greatly according to the type of climate and the altitude.

The first recommendation is that before the presence of a nest it gets in touch with NaturClimb. The capacity of reproduction of these, it is possible that in only one tree of one year to another pass of he does not have any importance to begin causing disorders, affecting straight to its well-being and comfort, him being able to produce allergic pictures.

To major exhibition, the levels of tolerance of the human body diminish. The caterpillars (phase of larva) are covered of hair urticantes that become detached and float in the air, therefore they can provoke annoyance in ears, nose and gullet in the human beings.

THE CYCLE OF CATERPILLAR PROCESIONARIA:

Coinciding with the beginning of spring, the processionary caterpillar or pine caterpillar, which has passed autumn and winter in the nests, feeding on the leaves or needles of the host pine and which have increased in size by twenty-five times (from 2 mm to 5 cm) , begin their descent and procession by the trunk of the tree in characteristic Indian rows. Hence its common name of “processionaries or processionary caterpillars”.

They do so in a way that protects each other’s head, which is the food of many birds, in this way they are protected with each other.

They are eventually buried in the ground, where they go into the pupa or chrysalis phase. In summer (July or August depending on latitude) chrysalis hatch; butterflies emerge whose lifespan is very short (between one and two days), which mate, starting the cycle again. They do so in a way that protects each other’s head, which is the food of many birds, in this way they are protected with each other.

They are eventually buried in the ground, where they go into the pupa or chrysalis phase. In summer (July or August depending on latitude) chrysalis hatch; butterflies emerge whose lifespan is very short (between one and two days), which mate, starting the cycle again.

Adult individuals in the form of butterflies, have exclusively nocturnal habits, so they largely avoid their predation by daybirds. Their brownish color makes them confused with the environment in which they live and they become invisible to their predators.

The female lays her eggs on the treetops, forming very characteristic spiral-shaped lattes around one or two needles. Between 30 and 40 days later the caterpillars are born (usually in the months of September-October), which will be well protected from both predators and weather conditions (cold, rain, snow, etc.) in the nest that they themselves have built. Immediately after hatching and exiting the larvae begin to feed. Characteristic brown spots on the cup may be observed, causing the defoliation of the tree. These will increase in size as winter progresses and the larval state of the caterpillar will increase in size and voracity.

In them will pass the daytime periods and leave to feed at dusk. In general, they will develop their entire larval lives on the same tree. They will abandon it to do the procession or rarely to look for an adjoining pine if they have exhausted all of the pine needles where they were born. This only happens on very small feet or when there is excessive laying on a not-too-much tree.

While the processionary population will peak, i.e. a maximum level of infestation, we normally cannot talk about forest pestas as such. A few nests will cause us to move out of our comfort zone and it will be necessary to carry out the proposed treatments,  pest control, by  NaturClimb. 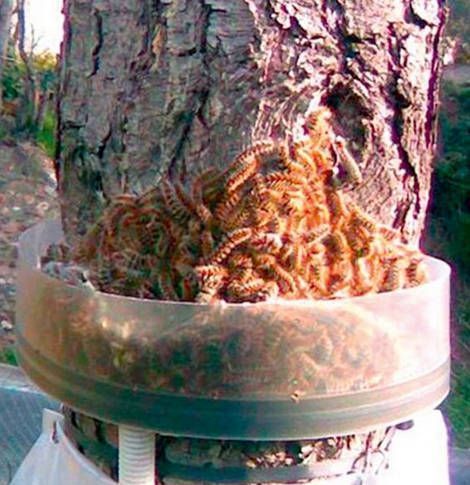 This is the natural cycle, nature self-regulates, but remind you that you will be a long way from your comfort zone when developing allergic frames. When applying pest control, NaturClimb will reduce the processionary population without affecting the development of the natural predators of the processionary:

In extreme cases within pest control, fumigations may be applied.  These are made with environmentally friendly insecticides or biocides (Foray 48 Bacillus). It is still a chemical even if it is according to the law; respectful of the environment and living things.

Another way, in the case of pest control, is tree management or forestry. If pine is the dominant species and is severely and recurrently infected, it can be clarified. Proceed to the felling and attachment of conifers, replacing these with species not susceptible to the processionor or pine caterpillar.

The pest treatments that NaturClimb proposes are:

Before the caterpillar begins the procession to the ground, that is, before the start of spring, NaturClimb will install some trap bags with substrate on the trunk.   The processionary you’ll think you’re burying yourself in the ground. It is convenient if there are children, place them at a height where or with the hand ladder, access is available. The solution of placing a glue on the trunk is not entirely effective. If the population is abundant, they end up passing a procession over another in the form of a bridge. It is important that during the filling of the bag, it is in good condition. It is not perforated by natural predators or that the entry is obstructed and/or filled by certain pine tracks. It is 100% recyclable, it must be installed before it descends and once the procession is over, collect it and destroy it. You only have to change the bag with the substrate every year. 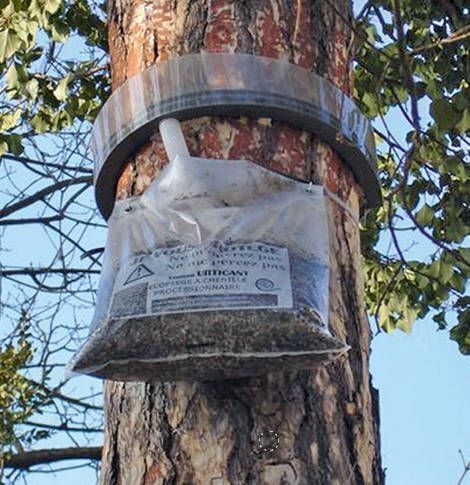 Eco-trap. Substrate to attract and lock up the processionary in its stage of change of larval state, from caterpillar to chrysalis

The installation of pheromones traps before the hatching of butterflies, during the month of June or July. This period may be increased according to the climatic location between the months of May and October. These will preferably be installed in the treetop. Females attract males, so that once fertilized they fly slightly to a nearby branch to stop laying eggs. Traps are female pheromones attract males that get trapped and females are not fertilized. It is 100% recyclable and only the pheromones capsule will need to be changed, which lasts for three months once opened and will be renewed annually. The trade name of the pheromone used is Pherodis Thpi distributed by Koppert (koppert.fr). It is advisable to uninstall the traps during the winter period to extend their lifespan. The distance between each trap shall be 25 meters in case the trees are aligned and/or 6 traps per hectare.

Upon the appearance of nests in autumn, NaturClimb moves to the top of the tree to remove them manually. From the first larval stages, the hairs of the processionary are hives, an effect that increases with the size of the colony. Therefore, this work is much more delicate when the nest is a large size and spring is approaching. Even the empty nests are filled with urticant hairs from the processionary or pine caterpillar.

Use of pertia, pruning scissors or saw to manually choose nests.

NaturClimb can be installed during the autumn month, before the nesting of the charcoal, nests on the pine cups. It is advisable to install between 10 and 20 nests per hectare in the affected area. They must be installed high enough to make the bird feel safe. 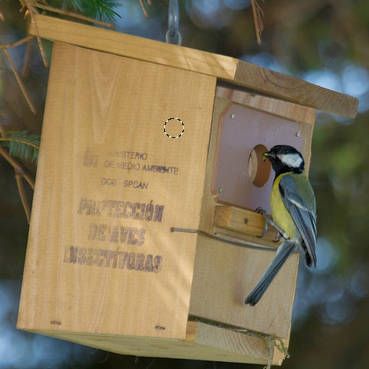 THE HIVE: THE WASP OR HORNET

The queen of the Asian wasp can reach about 3.5 cm and the worker, depending on the sex, between 2.5 and 3 centimeters. It is distinguished by its chest and abdomen black, except for the fourth segment, yellow. Its brown legs stand out for its yellow ends. Its wings are dark in color.

The Asian hornet has a length of 5 cm and a wingspan of 7.5 cm. It has a large yellow head with large eyes and a dark brown thorax with a brown and yellow abdomen.

The European hornet is larger and more colorful than wasp and Asian hornet, the queen measuring from 25 to 35 millimeters; the workers are smaller.

Its red and yellow colors contrast with the darker spectra of the Asian wasp. Its hive is less bulky than Vespa velutina’s, always with a downward opening. The inlet hole of the Asian wasp hive is on the side of the hive. It is found in old trees, under a roof, but never on top of trees as in the case of Asian trees.

These insects are very similar and at first glance in mid-flight, it is not easy to distinguish them. The best way to do this is to find the nest. The European makes a hive like that of the common wasp (European and Asian). The Asian hornet builds a large clay texture dying sphere, sometimes between 1 and 1.5 meters in diameter. This mud hive is usually placed at high altitude in the top of a tree.

The European hornet often takes advantage in many cases of cavities found in older trees. The peculiarity is that they will need a front entrance and a rear access, in the form of an emergency exit.

While the venom of these species is very potent, and their sting very painful, none of the species are aggressive with humans. Unless they feel attacked, in which case they will defend themselves. The hornets venture into beekeeping where bee populations are depleting. Thirty hornets can kill 30,000 bees in a matter of hours.

Asian wasp, like the European and Asian hornets, can inoculate its venom to humans. According to data collected in Europe, the Asian wasp poses no more danger than its European counterpart; Both prefer escape over attack.

They usually attack in defense of the nest, as mentioned; at first, if the nest is shaken or damaged, the wasps go outside and perch on it to observe what happens. 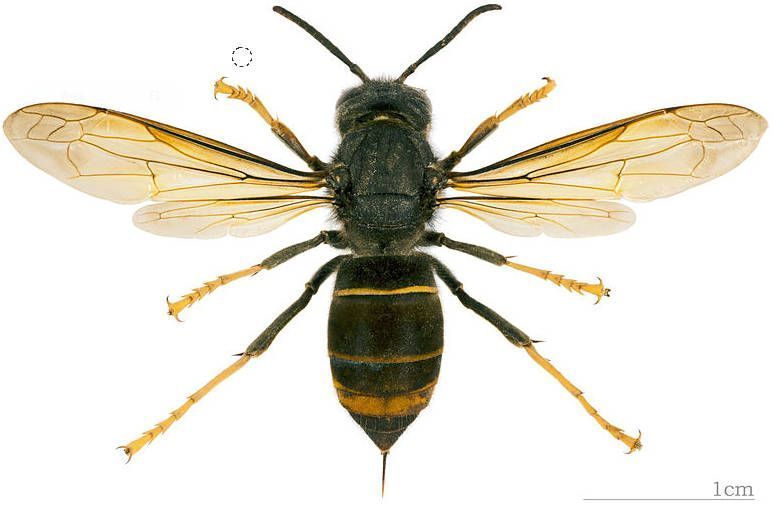 If the nest is disturbed again, one or more wasps fight the intruder by promptly biting it. They will do it even through the clothes, and they will recede by perching again in the nest.

Its guideline is to defend the nest at all costs. To such an extent that if fire is applied on it, wasps risk their lives defending it and can die.

These species leave the nest with the arrival of winter. Moment when the queen will find a place to hibernate. The new hives will start building in spring, the old ones will be abandoned.

Due to its colonizing potential and constitute a serious threat to native species, habitats or ecosystems, this species has been included in the Spanish Catalogue of Invasive Exotic Species, approved by Royal Decree 630/2013, of 2 August. 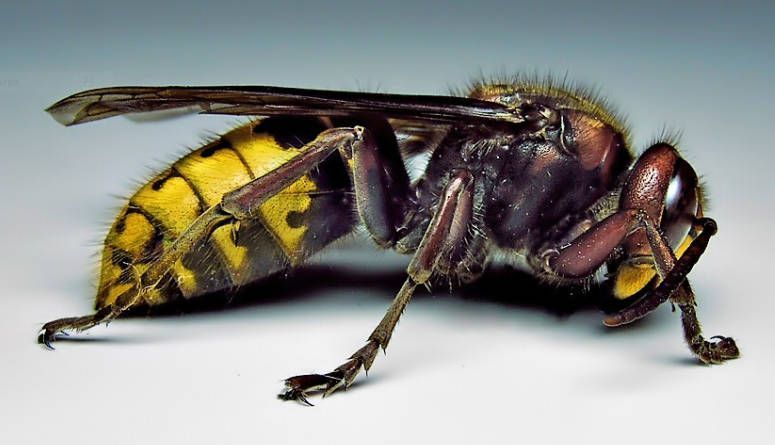 NaturClimb advises against interfering or assaulting hives. The hornets will reveal their aggression with the people who live near the nest. Some hunters have shot right.

NaturClimb advises not to leave accessible points of water or food (meat, sugar, fruits, etc.) so as not to attract them. Wait for the fall, in which case you are interested, we will proceed to dismantle the hive.

This work can be done if it is inhabited but is extremely delicate. The Hive of the European Hornet decomposes shortly after being evicted. It is advisable to isolate the cavity with a metal mesh, for example. The points of light at night will attract them.