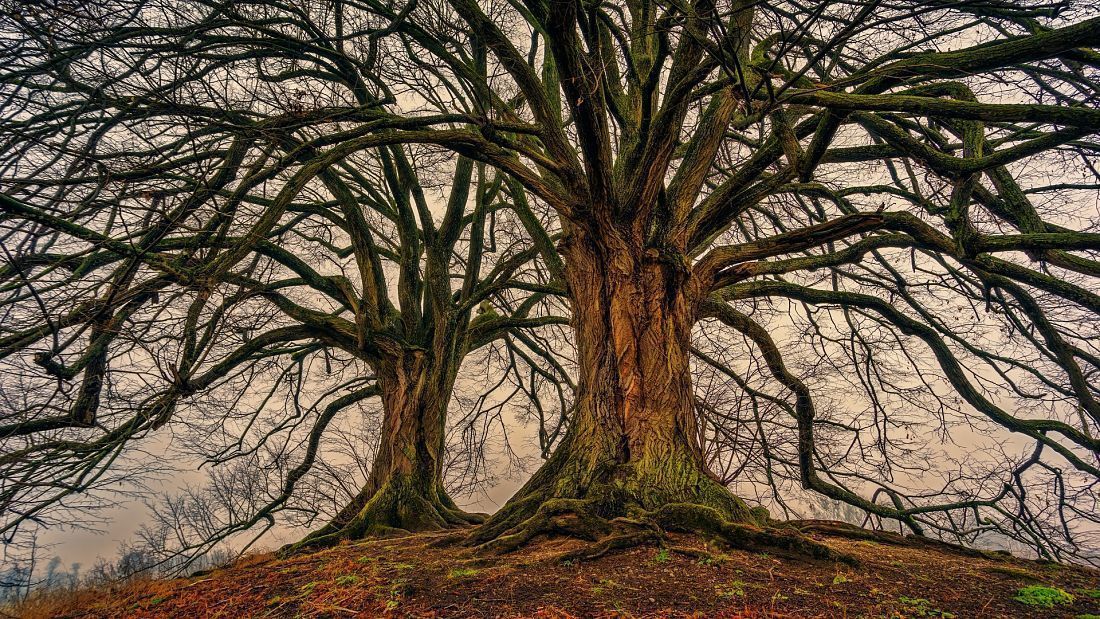 The questions you may have in mind are, what is the branches stabilization, why and when to use it.

As the word says itself, the arborist of NaturClimb will decide in every case to do this option or through the use of steel wires and special ropes system if the branch has an obvious risk to break down, without the need of make big sized cuts (over 20cm).

This, in most of the cases, will make the tree weaker and will make easier the apparition of pests and fungus, getting as a result an awful mechanical and sanitary state of our tree, thus, this shortens the long-lasting life of it.

One of the most important aims of the stabilization is that, in case of breaking and falling down of the branches, the ropes system impedes the landing of them on the ground.

In the following youtube linkage, two facilities realized on cherry trees can be visualized. In both cases, the putrefaction of the sustained branch is clear. It is a question of preparing and of reducing the break risk and at the same time, of making sure that in case of break, the branch should not reach the soil.

Another illustrative video of an installation of semi-static artificial support, which passed several years has been decided desintalar. The inclusion that had the oak copy, practically in the base of the tree, it has become possible to close and it has stopped suppurating. Although, we understand that it owes more to the installation with cable of steel that was realized at very little distance of the above mentioned inclusion and that he has decided to be supported for the time being.

The cases in which NaturClimb can make use of the stabilized one of branches by means of a system of ropes or cables of steel are for the following “defects” exist.

A branch is firmly anchored, when the level of the insertion with the stem or other branches is matched with the fibers of both axis, creating an axis joint.

This is not the case of the so called inclusive branch.

The inclusion is characterized for the intersection of two branches in a V formation on the top side, but there is a tree bark which impedes the matching of the fibers.

The wood layers which will come out, will overlap on the others, so over-growing will appear at the sides of the joints.

So, imagine a cut produced by a surgical intervention, and then sewed with huge stitches, where we could easily see both sides of the cut, joined.

In some cases, the strengths result of the growing of every of the branches we have, are active participants in the breaking of the fibers, with the help of the wind, or not.

Formed when a cut is forced, for a shear stress, torsion or a bending movement.

It is essential to point it out quickly, as the danger is permanent and could get worse because of the wind effect, ice or harsh transpiration, which are, the coolest and hotter seasons.

The fissures are easily recognizable for the scars and marks we can see outside in the surface, according to the kind of shape the branch has.

They are, in many cases difficult to spot because they grow as inner deformations, and also in the case of having a specie with a thick crust or even a rough one, the identification is way more difficult.

Necrosis and rottenness exist due to the wounds the trees may have, a pest agent (fungus or insects) and also weather agents, like ice, heavy rain, thunderbolts, etc. 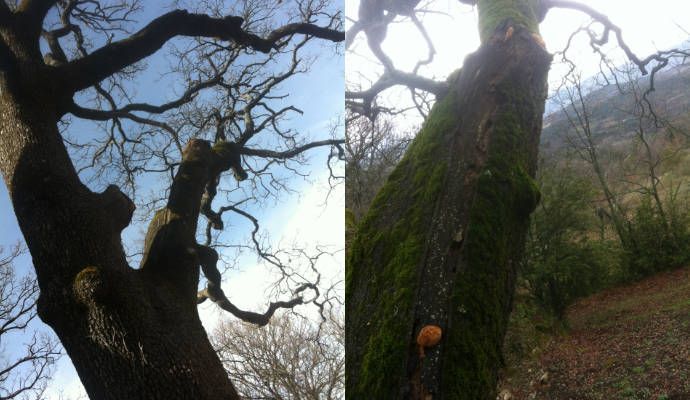 Tree to install system of artificial support. Although the vigor of this big branch is indisputable, its awful mechanical state does not leave place to the doubt.

The mushroom lignívoro that the parasite is the Inonotus rickii, very aggressive on having provoked in the wood the white putrefaction, that for the weight and length of this one, we are capable of affirming its fall in a brief time period.

In case of not being ready to do the payment that supposes the system, he proposes valizar and to signpost properly the pedestrian step along the risk that supposes a branch under these circumstances.

The entry and colonization of this so aggressive mushroom has taken place of course for realizing courts of big dimensions, on having lost big part of its photosynthetic capacity for the cut branch, the tree allows to die in many cases part of the wood that it possesses live to be able reequilibrarse at nutrition level.

They are, the hole or gap formed inside a branch as a consequence of the action of parasite agents like fungus and some kinds of insects. It could be dangerous and harmful for the tree structure to cut down branches from an element with cavities. 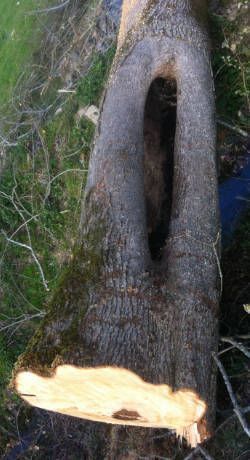 In this case we can visualize a big cavity, practically in the base of the tree and at the same time as there is compartmentalized one, in this case an ash-tree, so that the putrefaction of the mushroom has not affected practically the rest of the tree (dark circular spot). 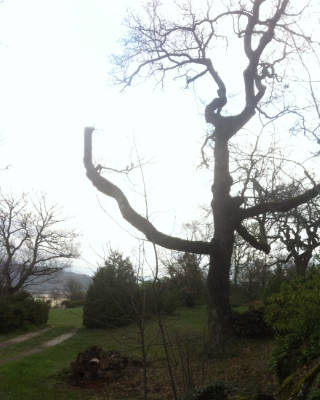 The branch of the oak, Quercus alba, has a double cavity to different heights. The pruning on continuations deprives to the whole branch of the tree of branches. This reduces drastically its photosynthetic capacity; in certain cases, he usually drives to the fact that the proper tree retires to the branch.

The owner covers a high risk of fall of this branch of big freightage. NaturClimb advises to realize a double anchoring of the branch before cutting it. The first one in triangulation with the pitchfork of the domineering axis. The second double to 45 grades from the first cavity.

The slenderness of a branch or the relation length / diameter

They are those usual intervention carried out when one of the side branches or a horizontal one is too long and the arborist’s opinion is that there is a high risk of bending and breaking it. It depends on the specie of the tree and its strength.

¿Why does appear the Structural Defects?

Inside the frame of the maximum respect to the arboreal vegetable patrimony, NaturClimb uses and develops the last skills and materials. All this to consolidate branches or trees of big freightage with high rupture risk. It can be produced for:

The drastic prunings provoke courts that the tree will not have heal capacity. In other cases, and being still capable of cicatrizar, it will do it with cavities in its interior. These consequences will be hardly diagnosticables for the technical nurseryman, on not having been able to evaluate its state and consequences from the exterior.

Materials to consolidate to the Woodland

NaturClimb is specialized in the usage of dynamic ropes  (10-20 %), semi-static (2-5 %) and steel wires (static), whose use depends on the tonnage (from 2 to 20 tn), and on top of that, the specific location where the branches work has to be carried out.

The use of the steel wires is called static because it does not allows any movement among branches, while dynamic ones have certain “freedom”, even though, it is reduced about 80%.

In some cases, some supports could be used, like “pillars”, which hold branches coping the development level of the outsider roots that some species have, like a great number of Ficus spp., Scheflera arboricola, etc.

In the image of the hut, it is possible to know by intuition the installation of a static system of support. Measuring is to support up to 12 tons in weight in case two feet on which the hut is supported and suspended tend to be opened by the weight of this one. Especially when he has to support punctual charges of temporary character: persons who spend the night or when cases of strong winds happen. In this location the mistral usually provokes damages in wooded masses.

The estimated weight of the hut is two tons and a half. From its construction, the client detected as in the base and line of union between two feet of the oak, a cracking was taking place. In French it is named, “fourche d’ecorce inclu” or included crust. It is one of the main reasons at the time of taking the decision to do this type of facilities. 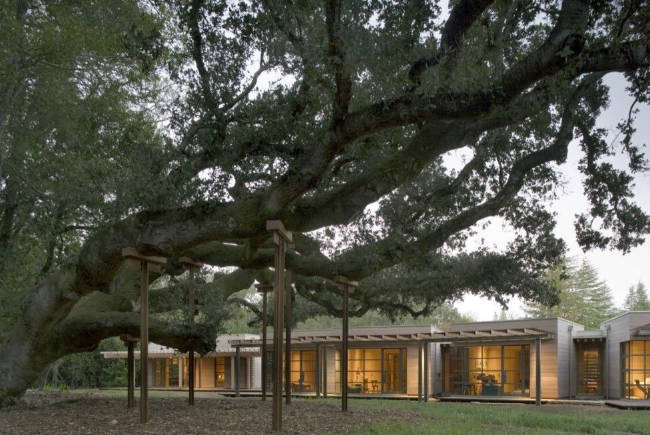 Example of propped up by a big development of branches and pitchforks in the horizontal plane. The tree is going to develop reaction wood in the low part of the branch on having been a species caducifolia. This type of wood is going to sustain the weight without major problem, any time its sanitary and mechanical state is good. Namely if the state of the tree is vigorous, the tree would not need to be propped up.

Although it is not possible to appreciate in the photo, the second work was realized over the hut. He installed to 2/3 parts of the distance to himself between the weak point and the entire height of the tree, a semistatic cordage in triangulation. This one limits the big movements of the glass in case of strong winds.

Always respecting absolutely the vegetable tree heritage, NaturClimb uses and develops the most innovative techniques, materials and instruments to get the best results of the work that has to be done, regarding the most risky tasks, like broken branches (because of natural factors like thunderbolts, overweight, matching joint process, cavities, etc.) and also caused by not very well done prunes, which in most cases produce awful consequences in the lasting life time of the tree.

When too deep cuts are done and the tree cannot heal them properly, or in other cases, even though the healing process can be carried out, cavities would be produced in the inner layers of the tree, and their consequences are really hard to spot for the professional because they cannot assess these damages from outside.